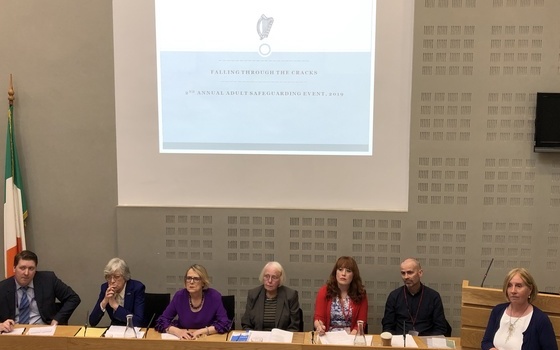 Scoping of a Regulatory Framework for Adult Safeguarding Welcomed

Call for Establishment of a National Advocacy Service

In parallel, the organisation also called for the development of a Regulatory Framework for Adult Safeguarding and an independent National Advocacy Service.

Speaking following a dedicated briefing on safeguarding legislation in Leinster House convened by Senator Colette Kelleher, Safeguarding Ireland said much of Ireland’s legislation relevant to safeguarding is either out of date, or non-existent.

An Adult Safeguarding Bill has been in development since 2017, and Chairperson Patricia Rickard Clarke said today that it needs greater urgency and broader input across many Government departments.

“The appropriate safety and protection of vulnerable adults (who include people with mental or physical disabilities, capacity issues, or frailty due to age) is currently not sufficiently provided due to gaps in our laws in Ireland.

Senator Colette Kelleher said that whilst commitments have been made at policy level, “the reality is that many adults are falling through the cracks of poor policy, law and practice. It’s over two years since my bill was introduced and it’s time for change. That is why we convened a meeting of stakeholders at Leinster House”.

Ms Rickard Clarke welcomed a Department of Health update that it is progressing Health elements for the Safeguarding Bill and will shortly be publishing two public discussion papers – however she said broader momentum is needed.

She also highlighted the importance of putting in place a Statutory Regulatory Framework to underpin the Bill.

“A Regulatory Framework for Adult Safeguarding would mean that bodies such as HIQA, the Central Bank and the Department of Employment Affairs and Social Protection would have Statutory powers to ensure that safeguarding legislation is adhered to once enacted.”

Safeguarding Ireland therefore welcomed last week’s announcement by the Law Reform Commission that examination of the need for such a regulatory framework is included in its 5th Programme of Law Reform.

Ms Rickard Clarke added that a third pillar to improving adult safeguarding is to establish an adequately resourced independent advocacy service available nationally. This would be a Statutory service to advise, represent, mediate and support vulnerable adults in their decision making and use of services. This would also help to detect abuse earlier and prevent it in many cases.

Related safeguarding legislation included in the Assisted Decision-Making (Capacity) Act was enacted in 2015, but not for implementation until 2020. It will include a long overdue overhaul of the wardship system and significantly strengthen and support decision-makingfor vulnerable people.

Ms Rickard Clarke called for full implantation of this Act in 2020 and continued by saying that while improved adult safeguarding laws and structures were keenly awaited – there was also much that organisations, individuals and families coulddo in the meantime.

“Banks can take steps within their own procedures to tighten up on the risks of financial abuse of vulnerable customers. An Post and the Department of Employment Affairs and Social Protection can improve how they identify, address and share information on fraud. A lot of good work is happening in this area. It should continue and be expanded,” she said.

Ms Rickard Clarke ended by highlighting that as World Elder Abuse day approaches next Saturday (June 15th) that public recognition of the need for strengthened safeguarding legislation was clearly highlighted in research commissioned by Safeguarding Ireland in April 2019.

In the Red C research 81% of respondents said tougher laws would encourage them to take greater action to combat abuse, making it a key driver for change in attitudes and practice regarding adult abuse.

It also found that 12% of those who witnessed abuse of a vulnerable adult in the past year did nothing at all. Just 15% sought professional advice – andonly3% reported what they witnessed to an authority such as the HSE or Gardaí.

Safeguarding Ireland recommends that all adults plan ahead and make their future choices known including to:

Safeguarding Ireland brings together 30 national organisations from public services, legal and financial services, the health and social care professions, regulatory authorities and NGOs all working together to protect vulnerable adults. (Members include the HSE, HIQA, An Garda Síochana, An Post, financial organisations and patient, disability and carer NGOs.)

Safeguarding Ireland was established by the HSE in 2015 in recognition of the fact that safeguarding vulnerable people from abuse cannot be addressed by any one agency working in isolation, but rather by the key agencies working collaboratively with a common goal – to ensure that adults who may be vulnerable are safeguarded.